Mines and minefields, My spoken words a review by K. O'Okwemba 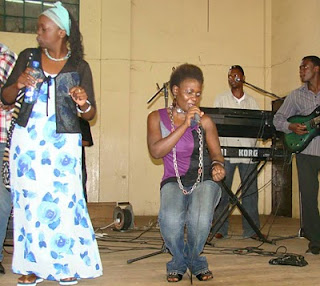 In the photo, Njeri in blue and dancing tall on the left, at a PEN Kenya event in Mombasa in which we read from "It's Our turn to eat, the history of a Kenyan whistleblower, by Michela Wrong. Nyota Ndogo gets down to what she does best...

Njeri Wangari, one of Kenya ’s most known contemporary performance poets has released her debut poetry anthology, Mines & Mind Fields: My Spoken Words, published by Nsemia Inc, a Kenyan publishing firm in Canada which was founded by Kenyans in diaspora. Nsemia Inc. is a Pan-African publishing house in the mould of the Nigerian based Cassava Republic publishing firm.

These firms are liberating the publishing industry and they are hugely involved in Pan-Africanisation of creative voices on the continent. They publish writers from across the continent.

There is something inherently significant in the second part of the title of the anthology which may be considered a disclaimer for the literary critic or the student of poetry to look at the poems also as created from and for the microphone, for the poet of this anthology is a spoken word artist.

The poet echoes Alexander Pope’s postulation that an honest wo(man) is the noblest work of God. Few of the spoken word poetics can exist beyond the stage. Most of that poetry is spontaneous raw draft hurriedly put together for recital. This poetry thrives in free verse, a rebellion from the disciplined structures of the old models such as the terza rima, the sonnet, the haiku, with their attendant treatment of imagery, metaphors or symbolism as a mark of good poetry.

But it is as thematic and militant as the American hip hop. It is with this background that we read the poems in Mines & Mind Fields: My Spoken Words, in our love of poetry as an elevated literary genre.

Njeri Wangari therefore casts herself not only as a champion of that artistic expression but as a pioneer. She is among the first performance poets who burst onto the literary scene in mid 2000s with the coming to birth of the Kwani poetry open mic - poems for the people delivered from the microphone to live audiences in Nairobi . But the poet is not entirely unconventional. The poem Low Moments is a neo-classic Alexandrian couplet with its jutted two lines in each of the six stanzas.

My eyes would be the master’s hand,

The refrain “were” and “my” which run through the entire poem, and the rhyming of “hand” in the first stanza with “wind” in the second stanza makes this poem particularly melodious and memorable.

Were fears a futile play of sweet song,

My hands would be reeds against wind

Thematically, the poet deals with such broad subjects arising from the interaction of the African with the white man, the daily struggles for survival in an urban setting, the role of the woman in society, amatory, anthropology, e.t.c.

And there are echoes from the legendary Ugandan poet Okot p’Bitek’s Song of Lawino in the poem “Women Behaving Badly.”

I am your typical girl from the village

Who was taught that trousers are for men

The persona like Lawino before her, receives unrequited love and appreciation from her husband who opts to leave her in the village to look for the socialite Nairobi woman.

I am going to Nairofi to rook for a real woman

But she is as contemptuous of the city women who have been cast as gold diggers. These women only return a smile after “smelling money” in a man. The city women in “Women Behaving Badly” though comparable to Clementine in Song of Lawino, because of their role in juxtaposing modernity and extant tradition, they are different from p’Bitek’s Clementine whose role in Ocol’s life is to preserve the now antediluvian polygamous institution.

But the first poem in the anthology, “10th Daughter of Mumbi” is the one that easily courts attention if for its anthropological foreground. It is a poem, in the words of the South African poet Lebo Mashile, which curves the straight lines of history. Did Gikuyu and Mumbi have another child apart from the nine daughters we were taught in our elementary schooling? The poet writes of the tenth daughter as “the one spoken of in low hushed tones.” She is,

The woman who without a husband bore outcasts,

Casting on the stone children born of

men but without fathers.

This girl was called Wamuyu. She is the foundation of single motherhood, the woman who raised her children knowing they were symbols of love, the girl who innocently sleeps with a man, the mistress who wrecks marriages, and she is the embodiment of feminism!

Whereas Wamuyu is banished by her community for baring children out of wedlock, the “man who held her behind, in the bushes,” is let off the hook. Every bad thing among the Agikuyu must emanate from the 10th daughter of Gikuyu and Mumbi. But Wamuyu may as well be a mythical lass created to temper modern stereotypes.

Publisher Dr Matunda Nyanchama, the founder of the Canadian publishing firm says there is a lot of African literature and narrative that needs to be captured, retained and transmitted. Says Dr. Matunda,

“ America is not only a military and economic powerhouse; it is a cultural powerhouse too that controls our worldview through the global media. And that is where we come in. Africans need to reclaim their mental estate. Unlike the West which seems to have exhausted its stories, Africa still has lots of unrecorded material. Soon Hollywood will be coming to Africa to film things we take for granted. We need to tell these stories from our own perspective.”

Njeri Wangari joins that beaten path of emergent Kenyan poets with published works. Here we have Shailja Patel, the influential Kenyan poet at global arena and author of anthologies such as Dreaming in Gujarat, Shilling Love, and Migritude; Sitawa Namwalie, the author of the acclaimed poetry anthology Cut off My Tongue, Phyllis Muthoni, the author of the poetry anthology Lilac Uprising, and Ngwatilo Mawiyoo of the poetry collection Blue Mothertongue.

Njeri Wangari launched her poetry anthology last Saturday at Silverbird Book Store on Nakumatt Westgate. It was an afternoon with the best of spoken word poetry from her colleagues from the performance quartet Mstari wa Nne. Members of the group include performance poets Denis Inkwa, Mike Kwambo and Grandmaster Masese.

The poems in Mines & Mind Fields need to be read allowed. They are both informative and enjoyable. And the anthology is a must read if for its symbolic transmuting of spoken word into text. The book is available in all leading bookshops.

Treasurer at the Kenyan Chapter of International PEN
Posted by Nightbrid at 5:19 AM

Promote Your Page Too